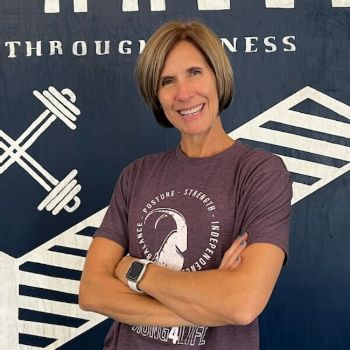 Charlotte was a collegiate athlete and after graduating from Louisiana Tech University with a BS in Kinesiology and Health Science, became a contracted strength and conditioning coach for the Navy. She discovered Crossfit in 2008 and quickly started collecting every certification she could to learn more about the crazy new world she had found. She’s a Navy wife (now retired), mother (middle schooler), athlete (any sport that she can fit into her schedule from adventure races, triathlons, marathons, mtn biking, hiking, snowboarding…), world traveler (lived in Japan, Germany and Bahrain and traveled to and Crossfitted in as many countries as she could) and gym owner (She’s owned one CF gym in CA and one “boutique” strength and conditioning gym in Bahrain).

Charlotte created her first specialty CF senior’s class in 2011 and developed programs for other special populations, such as adaptive athletes (TBI and amputees), veterans groups and a juvenile detention facility.

She’s been honored to see Crossfit change the world for all athletes but especially for women. Over the last 10 years, she’s been honored to learn from and work with some of the greatest influencers in the CF community. She is still striving to learn more as CF changes and as the fitness world evolves.

Her mantra is to “change the world, one person at a time.” So, she decided to take her passion and knowledge to help seniors and create the STRONG4LIFE Method. A programming resource for other CF gyms around the world who want to improve the lives of seniors. And help her change the world.

Let's hear a weird fact about you.

We'd love to send you information about our pricing

Enter your details below and we'd be happy to show you our rates and explain them in detail!